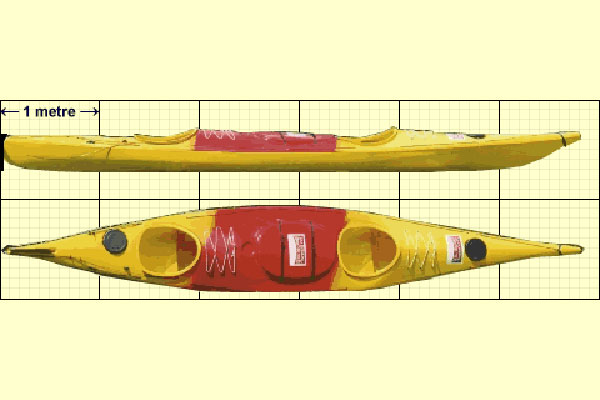 Over a decade has passed since the 1989 release of the Southern Light double sea kayak. The 1989 version broke new ground in several areas of design and fit-out. Some of these are now touted as ‘Industry standard features’.

Back in 1989 we developed the original boat in total isolation. No other New Zealand kayak manufacturer had built a kayak of this type. Our development motivation was simple – we wanted one of these boats for our own use. Our paddling needs were in hindsight the same as many future customers.

The bow paddler gets an even dryer ride

The ‘Industry standard, footrest system is even more comfortable and easy to adjust

Our customers say we got it right!

The Southern Light EX is a whole lot more boat than other industry imitators. Who knows – it may even be a more affordable option!

In all respects the Southern Light EX is an even better boat.

The concept as envisaged has proven to be a fact!

Paddlers of limited kayaking ability with uneven strength have completed many trips in total safety. The cargo hold concentrates the mass of both paddlers equipment where any ships captain worth his salt would put it… in the MIDDLE!

It you are confused about the comparative safety of different double sea kayaks, do this. Demand an on-water demonstration of the kayaks you most fancy. Load the cargo spaces with weight comparable to your camping/personal gear, roll the boat over on the water and execute a self rescue. In the Southern Light it’s as easy as rolling it over upright and climbing in and paddling. That’s right! The small amount of water in the cockpits is water ballast. Other doubles fair worse!!!! Some may leave you in deep trouble.

The manufacturers of some of the above suspect kayaks have recently adopted our idea of the centre hold. BEWARE! The Southern Light is the only double sea kayak designed from the outset as a centre hold boat. Some others reportedly “blow over” in strong cross winds.

The Southern Light was always designed to have a centre hold.