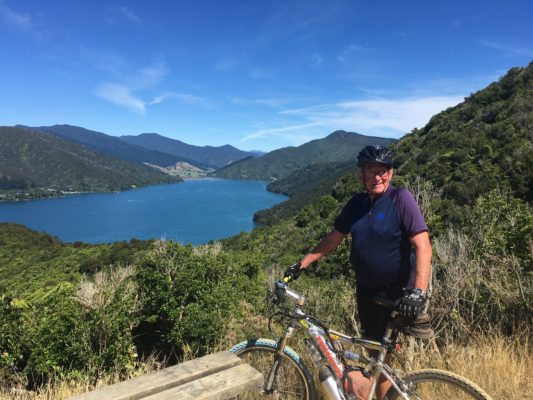 March 2018.  Retirement is good. My retirement hobbies include energy substitution (going well), building a larger boat (started 1986 – burned 1996 – launched 2017) and the provision of safe drinking water nationwide (slow-to-stalled). I have made three public submissions, and two private submissions to the Havelock North Drinking Water Inquiry. The Stage 1 Inquiry Report indicates that source waters are not protected by the National Environment Standard for Drinking Water. “Your (polluted) stream is my drinking water catchment”. The report also indicates that the Ministry of Health has been asleep-at-the-wheel whilst refusing to administer its own Drinking Water Standards for New Zealand (DWSNZ). The (nationwide) Stage 2 HN Inquiry Report has been released. Vindication! Expect huge Drinking Water changes ahead. To learn more – click on my ‘ABOUT’ dropdown menu. Then click ‘Drinkable Water’

And why not broaden this website to include safe drinkable water? Kayaking is best done on water that is not polluted.

I built my first boat at age 4. I remember the episode well. We lived on an orchard in Papanui Christchurch. I sealed up the gaps in a wooden black current picking tray with mud and launched it into a water trough. It floated – so I jumped onto it – went down like the Titanic. That was a very early lesson about hull volume! The second lesson – never do such testing just after my mum had me all cleaned and dressed to go to town shopping. I would have found the recently passed anti-smacking legislation handy that day.

I am a motor mechanic – starting my five year apprenticeship in Waiau in 1959 and finishing in Nelson. I started under Ted Robson and ended with his son Keith. Father and son taught me much more than spinning spanners. By 1969 I was Service Manager at a large Ford garage with responsibilty for 40 staff. In 1971 I attended The Ford Marketing Institute for three weeks. This Robert McNamara developed training  has served me well ever since.

In 1972 I was ‘Head-Hunted to work for an even-larger 45 man Ford Dealership. In1974 I started my own manufacturing business assisting inventors to develop their ideas to market level. This involved both metal and fibreglass production. The diversified business grew rapidly until Robert Muldoon virtually destroyed it with his infamous Boat Tax. 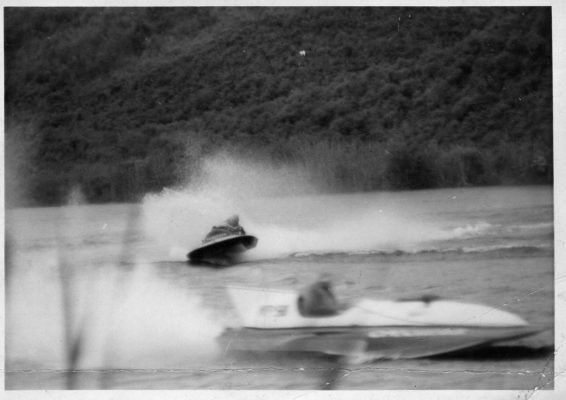 The ‘dynamic’ hydro is Keeno. My first race – still learning the limits. Yes – I did flip it over a year later.

I had always been fascinated with kayaks because of the simplicity. When the opportunity arose – I had to have one. 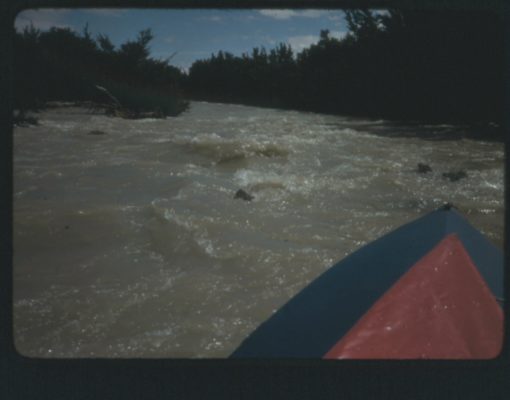 First river kayak trip on the upper Wairau River in 1966. Hmmm. Alan yelled “don’t go there”. But too late I learned the channel ended in a manuka ‘strainer’. I caught the bug. 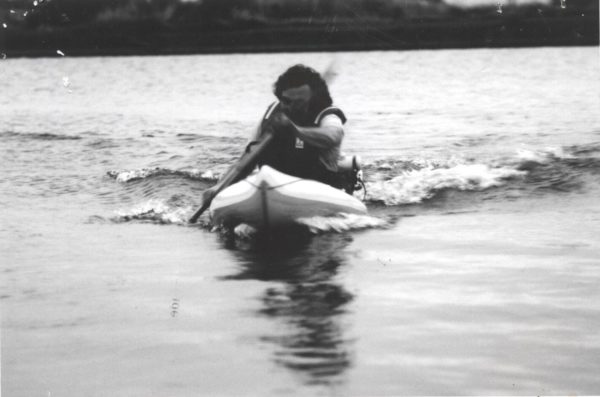 and rapidly became the worlds most powerful paddler (just joking). Thanks to the  Kawasaki KT15 engine. 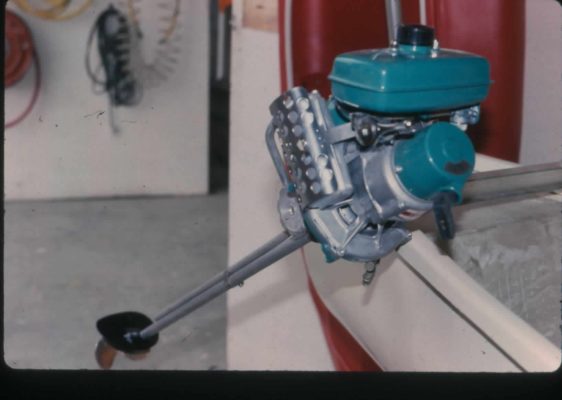 The Sisson PowerPaddle was a product developed for Open Canoe use. Twenty sold. 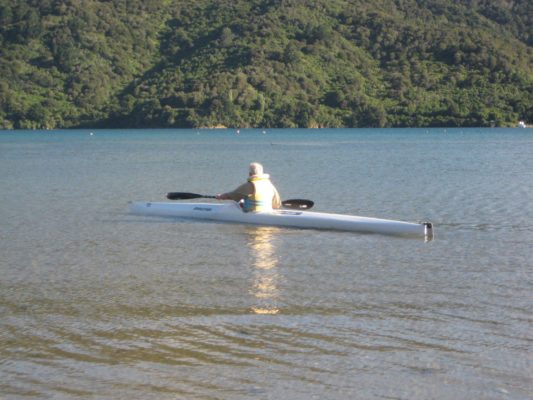 Since 1955 snow skiing has been my main sporting interest. 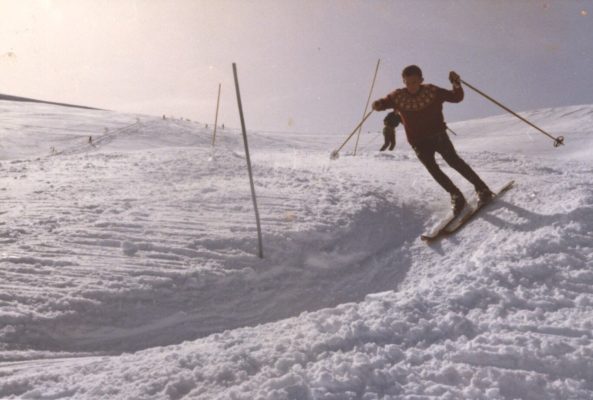 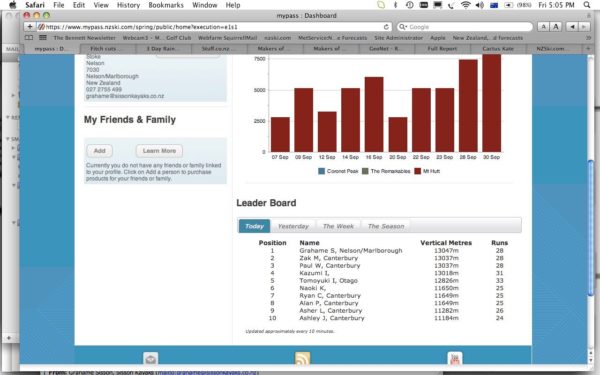 A magic day in the winter of 2014. I topped the Leader Board with a vertical descent of about two Everests.

My first multisport race was the 1987 Norsca Mountains to the Sea – as a team with Alan Fraine (cycle) and Mal Clarbrough (runner). 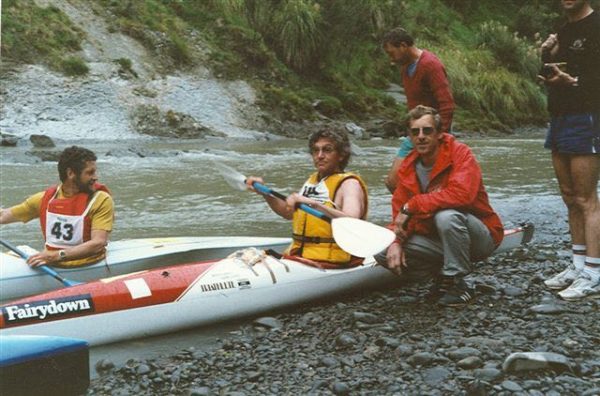 Grahame in Triathlete at Norsca Mountains to the Sea race – 1987. With cyclist Alan Fraine. We came third.

In 1989 I was the first Speights Coast to Coast sponsor to complete the event. 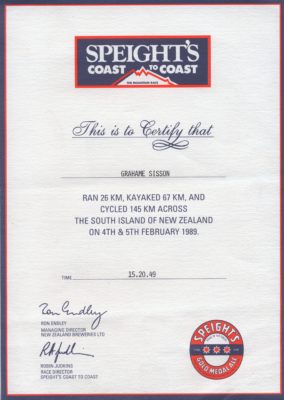 The boat I chose to paddle was a Delaware. Which allowed me to be forever proud of my final cycle time to Sumner. 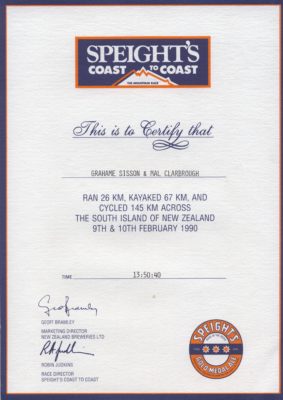 And the next year I did it with a friend. Paddled a Trident (Blown up Vision 2 hull)

And always there had to be fun 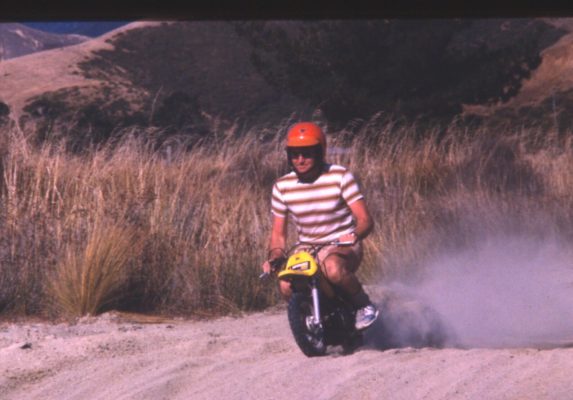 The Pee Wee 50 purchased with a broken frame. Welding it up – then wet-wrapped the entire frame with Kevlar and fibreglass. Unbreakable fun. A REAL motorbike. Todd snd Richard had to wait for their short turns. 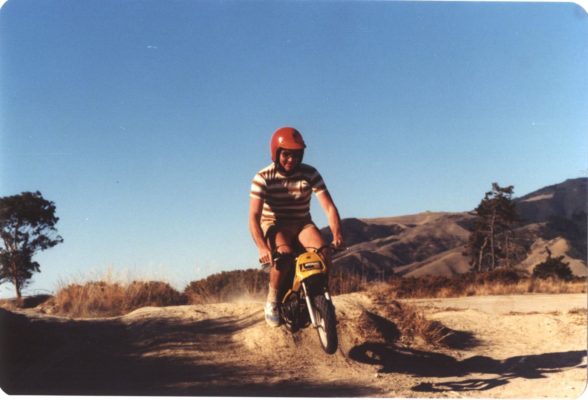 I really love riding big powerful motorbikes! Since 1983 my personal motorbike has been a Honda Wasp.

And having helped Les Vincent plan this Nelson to ChCh race 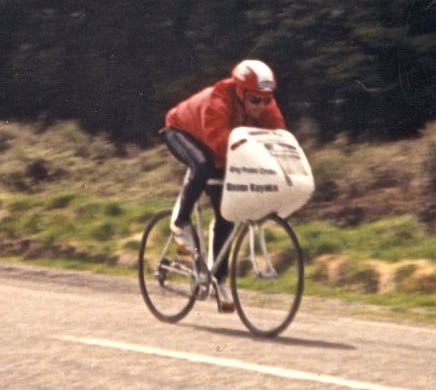 Downhill off Lewis Pass. Getting tired because I am not dropping my head to use the periscope. Note the speed-skiers lower leg fairings. Huge advantage above 40 kph. My 2.30am speed off Spooners was 96 kph. My average speed off Lewis Pass was 70 kph. Faster that my first motorbike – The Ducati  55 that I owned when I lived in Hanmer. 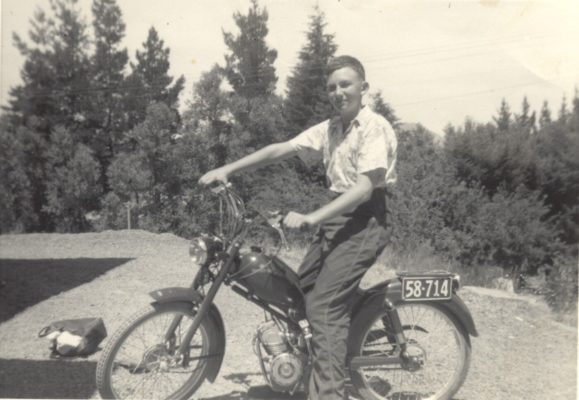 Seriously – it WAS a Ducati. Their original product. 103 Pounds fifteen Shillings please.

Everyone else in the November race knew that my ‘training’ was the February Coast to Coast. With zero training I did 202 miles in 16 hours – including two flat tyres – caused by that hedgehog I dispatched at Coal Creek. 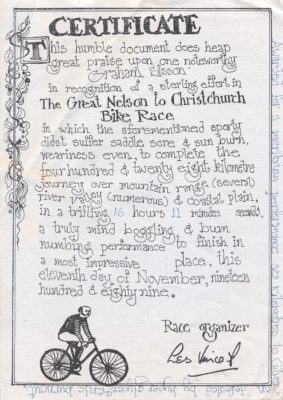 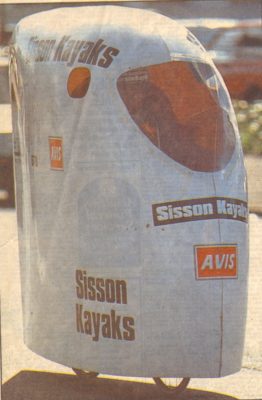 Steve G and I set out to cut the wind drag from the bike chain. Steve’s answer! 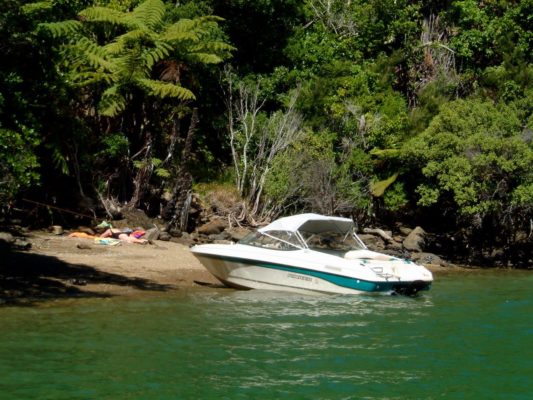 Always a sheltered private bay to be found 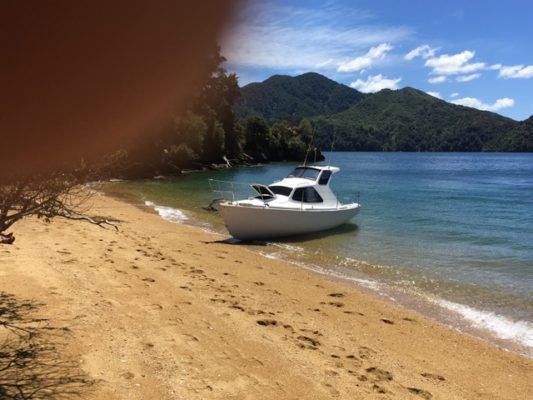 None of the business achievements would have happened without the wonderful backup that Lynda has provided. Call it teamwork, 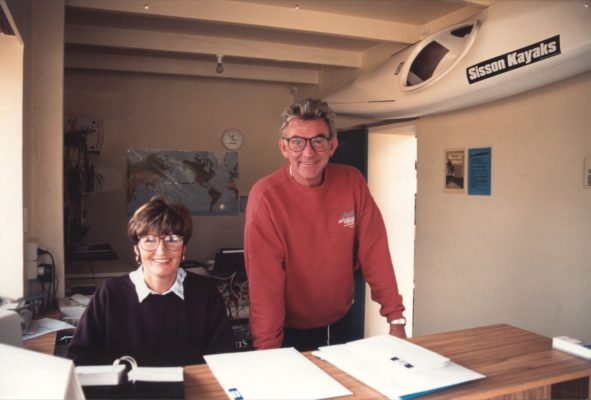 Newly completed office – soon to be destroyed – and my hair turn white.

Here is an example. Teamwork – like the time I spotted the worlds biggest ice-cream in Queenstown – and just had to have one. 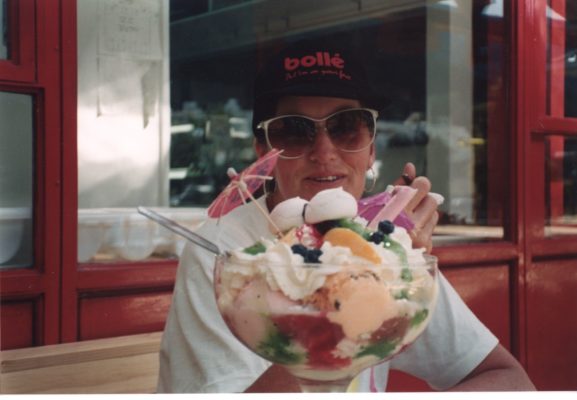 Team work to the limit 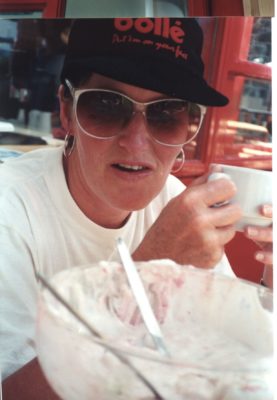 Since 1997 until 2010 my natural inventiveness that had previously reflected in product innovation, has been channelled 95% into the factory – which is off-limits to visitors. 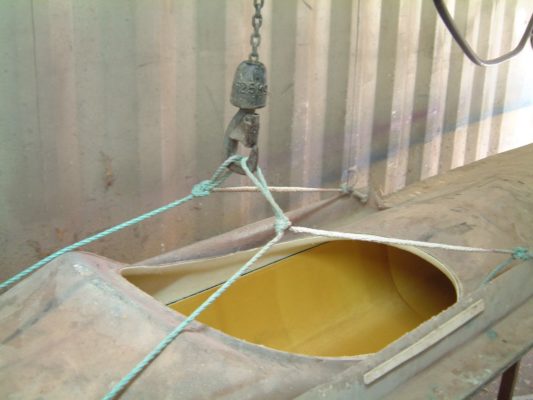 The main manufacturing was done inside four 40ft containers that have been greatly modified. My manufacturing is very highly mechanised. Designed to minimise effort whilst maximising productivity. Sounds familiar! Maximum distance-made-good for the lowest fuel burn! 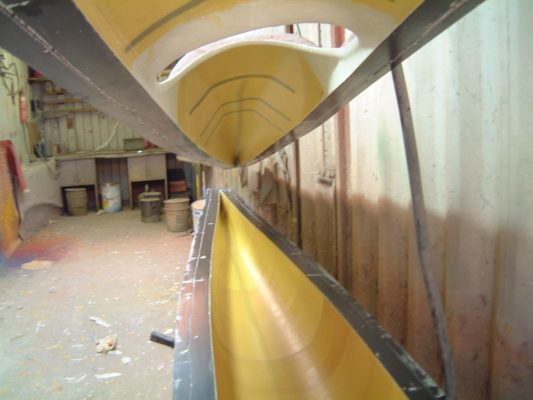 “This Methven composite ‘hobby-workshop’  is the best workplace I have ever worked in. Great music thru the Apple Airport! Air conditioned to set temperature – and very – very efficient.” 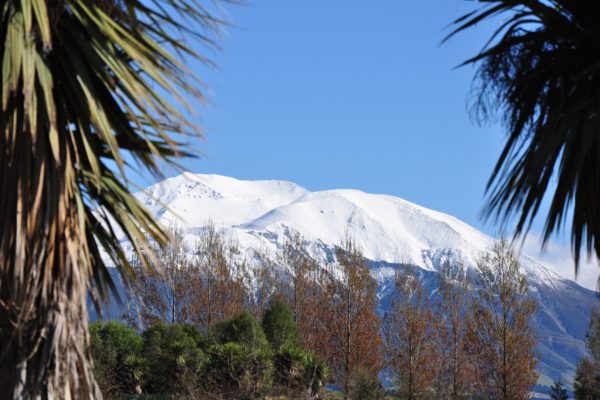 Must rush now – the mountain calls>>>>From our garden.